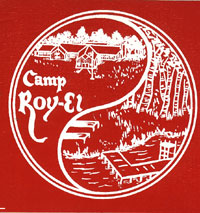 Camp Roy-El was established in 1952 by Roy and Ellen Brigman primarily to provide a camping experience for the many youngsters who had just gone through a polio epidemic and who had limitations in what they could do. The Brigmans, 12 polio survivors, two campers with cerebral palsy and one with a heart defect, camped in tents at the Hickory Hills ski area and cooked all of their meals on open fires.

Campers were assisted by Mrs. Brigman’s 15 senior Girls Scouts and three other adults. Two of these and two of the original campers were still associated with Camp Roy-El, as were the Brigmans, in 1991. In 1954, they moved to the Twin Lakes Residential Camp, which they continued to rent, so that the Handicampers might enjoy swimming. Activities ranged from crafts to archery and riflery, excursions, to evening activities including camp fires, carnivals and visits from special people. In the first year, they had a boat trip on Grand Traverse Bay and went fishing in Oleson’s Trout Ponds. They fished every year until 1989 and continued to enjoy the boat trip, through the 40th summer.

Camp Roy-El was manned entirely by volunteers – both adults and the high school group known as the Teenaiders. The adults ranged from college students to retirees and physicians, nurses, and educators. The Teenaiders had always been known as the “backbone of the camp,” because they were constantly with the campers and helped them in every way possible – feeding, pushing wheelchairs, putting on braces, helping them with games, swimming, and wherever needed.

Campers paid no fees and no fundraising drives were ever held. Camp Roy-El was supported entirely by voluntary donations. The entire Traverse City area was involved in activities, planning, funding and the welfare of the Camp Roy-El Handicampers.

In the 40 years of Camp Roy-El, hundreds of campers and Teenaiders worked and played together with the help of countless staff members. Camp Roy-El closed following the summer session of 1991, as its original aims and purposes had been met.

Today, Camp Roy-El lives on through a scholarship endowment. In 1992, the Camp Committee established the Endowment at the Community Foundation as a permanent tribute to the many campers and volunteers that Camp Roy-El helped during its 40 years. The spirit and memories of Camp Roy-El continue to live through the Camp Roy-El Scholarship Endowment.

While repayment is not required, it is hoped that in future years recipients will consider contributing to the Camp Roy-El Scholarship Endowment in order to perpetuate and expand the number of scholarships that may be given. Applications are available annually in the spring to juniors and seniors, currently completing undergraduate degrees at Michigan based colleges and universities. Applicants must be pursuing a profession dedicated to working with persons with disabilities and maintain a minimum 2.5 GPA. Possible fields may include allied health, nursing, medicine, occupational therapy and physical therapy or students in social work and education.

Ron Smith was an ardent supporter of Suttons Bay High School and its athletic teams and was quick to greet everyone with a smile. He and his wife Marie did not miss a game his stepsons played in and they could still be found at the football field on Friday nights long after their sons’ graduations. He was also a beloved community member, quick to greet everyone who stopped by with a smile, and was always willing to talk Norsemen sports regardless of wins and losses.

Through this scholarship, Ron's memory lives on through Suttons Bay High School graduates as they pursue success at the next level, whatever that may be and in all challenges they may face.