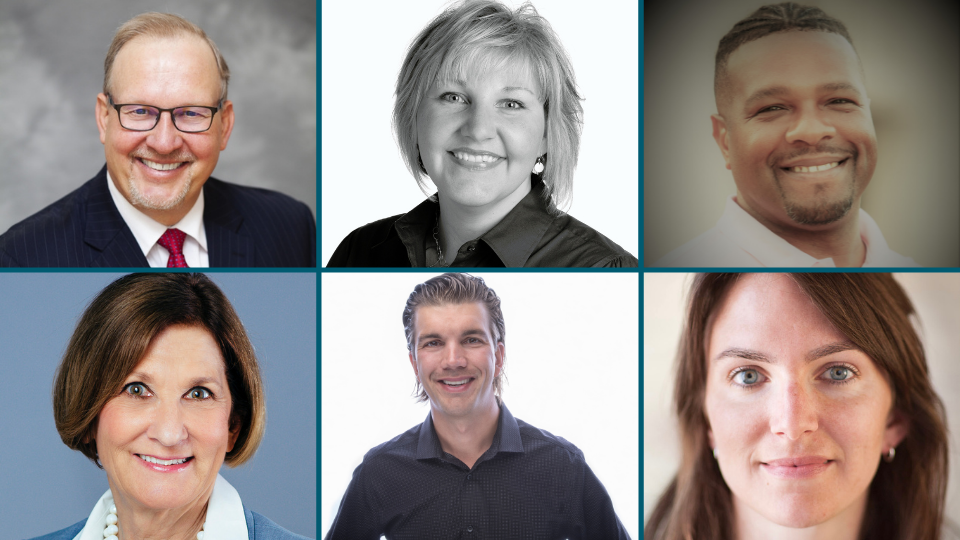 “We are excited to welcome our seven newest Board Directors to the organization,” said David Mengebier, President and CEO of the Community Foundation. “Each of our new Directors provide a unique perspective that will support the Foundation in its continued strategic growth throughout 2022 and in the years to come.”

Megan Royle Carrella has been with Herman Miller for 15 years and part of the larger design industry for almost 20 years. She currently serves as the Sales Operations Manager at Herman Miller and has a successful track record of leadership support and project management in progressively responsible roles. She is also a mother of two and owns Vita Bella Italian Kitchen and Market with her husband.

Marshall Collins is the Regional School Health Coordinator and Diversity Equity Inclusion and Belonging (DEIB) Consultant for Northwest Education Services, which includes program oversight of NorthEd’s SNAP ED Program, LifeSPAN, Farm-to-School, and DEIB support. Marshall received a degree in teaching from Concordia College in Ann Arbor and went on to teach at Northport Public School for 10 years. Marshall has served as Northport’s Varsity Soccer Coach and Athletic Director and his work also involves supporting the Grand Traverse Area in continual efforts in the realms of social justice.

Elise Crafts is a professionally certified community planner and developer who founded Statecraft in 2018 to help communities organize and implement their ideas. Prior to founding Statecraft, Elise worked as a community planner with Networks Northwest, planner with Mansfield Land Use Consultants, and planning and zoning coordinator with Peninsula Township. Elise has a Master’s degree in geography from Western Michigan University and a Bachelor’s degree in geography, sociology, and writing from Aquinas College. She splits her time between Traverse City and Frankfort and has served on the board of Commonplace, the subcommittee of the Lower Boardman River Leadership Team, and on the board of the Institute for Sustainable Foraging.

Dr. Laris Galejs was born and raised in Ames, Iowa where his immigrant parents were faculty at Iowa State University. He attended the University of Iowa, studying biochemistry, and attended medical school there as well. After a urology residency at William Beaumont Hospital in Royal Oak, he served eight years on active duty in the Air Force. Once honorably discharged as a Lieutenant Colonel, Laris and his wife moved back to Michigan in 2008 to be closer to family and to Benzie County, with a permanent move to the county in 2021. Laris was in private practice in urology and now works at Munson Healthcare with an office in Cadillac and Frankfort.

Mark Irwin was born and raised in Bellaire. He attended Michigan Tech University and ended up graduating from Central Michigan University with a double major in industrial education and physical science education. He elected to return to his hometown and pursue a career in insurance; 20 years later he is now Principal at Fischer Insurance Agency with offices in Bellaire and Elk Rapids. Mark has served on the Elk Rapids Chamber of Commerce and the Paddle Antrim board. He currently sits on the board of the Bellaire Downtown Development Authority.

Chris MacInnes moved from Southern California in 1985 to join their family-owned business, Crystal Mountain. She is a graduate of St. Lawrence University in Canton, NY. As President of Crystal Enterprise, Chris is active in day-to-day operations as well as the company’s on-campus real estate development. Chris is also involved in regional, state, and industry organizations including currently serving on the Michigan Economic Development Corporation Executive Committee, and as past chair of the Michigan State Chamber, Michigan Travel Commission, and the Traverse City Area Chamber of Commerce.

Dan Phillips was born in rural central Indiana, where he lived for 15 years before moving to southeast Michigan in 2003 with his family. He graduated from Michigan State University with a Bachelor’s degree in religious studies and later attended Garret-Evangelical Theological Seminary, graduating with a Master’s degree in divinity. He currently serves as a Pastor at the United Methodist Church in Bellaire.

To learn more about the Community Foundation’s Board of Directors, visit: http://www.gtrcf.org/.