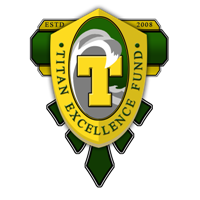 The Titan Excellence Fund Endowment was established in 2010, the result of a three-year effort, primarily led by Traverse City West Senior High alums and widely supported by community members.

Grant awards supports programs or projects to benefit students of Traverse City West Senior High, with a primary focus on supporting student life and academics. Programs or projects for music or athletics are also considered. Programs or projects could include, but are not limited to: basic classroom materials, extracurricular activities or new clubs, school-related events, support for student involvement in community service projects, field trips (including cultural arts activities).